When we leave the ship, most of you have elected for the four-night extension in Switzerland: two nights in Lucerne and two nights in Zurich.

We will depart the ship some time in the morning after breakfast and the ship passengers will be transferred to a series of coaches. For those who have elected to not do the Swiss extension, we say “Auf Wiedersehn” to them. For those of us who have signed for the extension, I will attempt to get our entire group on the same coach.

I have been comparing the value of the Swiss franc to the US dollar for over a year and they are almost equivalent.

Switzerland is not a member of the European Union, so the Euro is not used here. I will have information about whether or not the Euro is ever accepted. But you are safe to use your credit card and do not have the vendor convert to the US dollar.

Switzerland has a total population of about 8 ½ million. The capital is in Bern. The nation became official with the signing of the Peace of Westphalia in 1648 that theoretically ended the more than a century of religious wars. The Swiss Federal Constitution dates from 1848. The nation has fiercely maintained its neutrality since driving out Napoleon, but its citizens definitely are not unarmed. As a result, it was not invaded in either World War One or World War Two. At the end of World War One, the short-lived League of Nations headquarters were located in Geneva.

Hitler hinted that he intended to invade Switzerland for its strategic location, industries, technology, but probably not for the chocolates.

There is an apocryphal story that Hitler threatened to invade Switzerland in about 1942, bringing in 100,000 battle-hardened troops with full armor. The Swiss responded that their army would send 1000 men to their border to stop the Germans. The Germans never invaded. The Swiss Air Force did shoot down over 10 Luftwaffe planes and threatened to shoot down Allied planes, but as far as I can tell, never did – but did inter over 100 Allied bomber crews for the duration of the war when their disabled planes crashed on Swiss territory.

Our first thing is a highlights tour of Basel. It will not be too comprehensive. If you are interested in architecture, names like Renzo Piano, Frank Gehry, and Tadao Ando come to mind.  If you have heard of Novartis, Ciba and Hofmann-LaRoche, you might be interested that they are based in Basel. The University here was founded in 1460. Erasmus, Daniel Bernoulli, Jacob Burckhardt (the man who gave the name “Renaissance” to the world), Friedrich Nietzsche, Karl Jaspers, and Carl Gustav Jung all taught there. The city’s origins go back to Roman times and we might see the Roman theater in Augusta Raurica, about 12 miles from Basel. The Franks conquered the area in the 6th century. We might see the Basel Minster, built over a long period from the early 11th century until the end of 15th century.

The city currently has a population of around 170,000, a decrease from 212,850 in 1970, but still the country’s third largest. This is Switzerland’s only cargo port (remember that the country is land-locked) and is a rail hub that serves German, French, and Italian networks.

In 1356, a devastating earthquake almost completely destroyed Basel. As most houses were made of wood, they either collapsed in the quake or caught fire in the conflagration caused by candles in the aftershocks. Most masonry buildings were also destroyed in the major quake and the aftershocks that lasted almost a full year.

Probably the best-known sometimes resident of Basel is Roger Federer.

When we leave Basel, we will head southeast on Highway 2 for about an hour drive. That takes us into central Switzerland. We will still be in German-speaking Switzerland. Observe Mount Pilatus (7000 feet) that is nearby and also Mount Rigi, both of which are in the Swiss Alps and you can see why this city has always acted as a magnet for tourism. Take a look at this short video of views of Pilatus and Lake Lucerne here

As far as I can tell, this city of about 80,000 does not have a Roman background, but rather the founding of a Benedictine Monastery of St. Leodegar around 750AD.[1] The abbey was sold to the Hapsburgs in 1291 and the city took it over in 1433 because Lucerne was no longer a member of the Eidgenossenschaft (I translate that mouthful as Covenanted, but in Switzerland, the connection is with the Confederation.) It is now both a parish church and monastery church and is a late Renaissance masterpiece.

[1] Leodegar of Poitiers was a martyred Burgundian Bishop of Autun, who disputed the Franks. If you were with me in southern France a few years ago, we visited Autun.

When I was researching this, I ran across an article stating that in 1804, Friedrich Schiller wrote the play William Tell that allegedly took place in Lucerne. (Remember the “William Tell Overture” by Gioachino Rossini that should remind you of the Lone Ranger) I am assuming that either this day, 12 August or the next, we will visit the Kapellbrücke. The word “brüche” is bridge in German and “Kapel” is chapel. This wooden bridge, that crosses the River Reuss, was built in 1333 and is one of the oldest wooden bridges in Europe. Although at one time longer, it is now 170 meters and was part of the fortifications of the city. Look for the paintings if we get a chance to cross this creaky structure. It suffered a major fire in 1993 but has been reconstructed. It is covered and has a distinctive tower in the middle.

Once we get to the city, plan on a short walking tour before we check into our hotel. Then we relax for the evening.

On 13 August, we will get a chance to see the iconic Lion Monument, sometimes called the Lion of Lucerne.

It was carved into a bluff in 1820-21 to commemorate the 800 Swiss Guards massacred in 1792 during the French Revolution at the Tuileries Palace. If we get close enough, you might be able to read the inscription: “HELVETIORUM FIDEI AC VIRTUTI” (To the loyalty and bravery of the Swiss). Just prior to the 18th century, many European rulers had a personal Swiss Guard, but today you only see them at the Vatican. 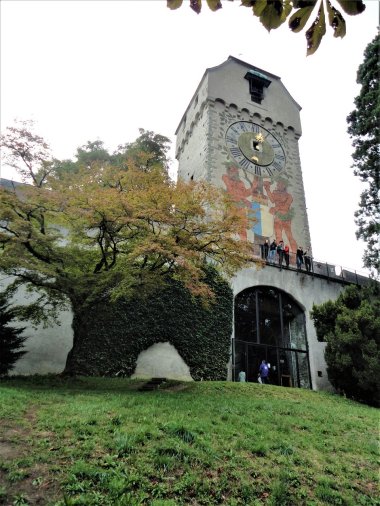 We will also visit the medieval walls and their nine towers that was constructed in the 13th century. We should stop at the tower clock.

After breakfast on 14 August, we check out of our hotel and are transferred to a boat for a scenic one-hour cruise across Lake Lucerne. With Pilatus decreasing in size to the boat’s stern, we cross one of the lake “bulges” to Vitznau on the east side of the lake.

I couldn’t help not putting in here one of my prints of a ship of the Swiss “Navy” that was painted by Lyonel Feininger, called Toppsegelschoner (Top Sail Protector). Note the Swiss flag on the stern. When I had it framed, the framer (who had been born in Switzerland) was so happy to see this anachronism.

In Vitznau (your checked bags will mysteriously appear on the coach), we travel north on highway A4 for about an hour, passing through the Canton of Zug and Zugersee, I don’t know if we will actually go into Zug, but archeological remains there go back to around 5500BC with human trace evidence back to 14,000BC! The medieval town was walled (like many during stressful times). Originally an agricultural community, it industrialized in the late 19th century and because it traditionally was part of a low tax region, a number of multinational enterprises have their corporate offices there. The prime agricultural product today is Kirsch, a cherry brandy. This is found in some Swiss fondues and German Schwarzwälder Kirschtorte (Black Forest cake).

We then take highway A3 and 3W into Zurich, our final destination. This city of 1.3 million (the largest city in Switzerland) is at the north end of the narrow crescent-shaped Zürichsee (lake). We check in to our hotel on Walchestrasse and on the Limmat River, just north of where the river connects with the lake.

The name of Zurich can probably trace its nomenclature to a bastardization of the Gallic name of Turîcon. Its history begins with Celtic origins; then conquered by the Romans, who built a fort to collect taxes on goods traveling on the Limmat River. The grandson of Charlemagne, Louis the German, founded the Fraumünster Abbey in 853 as a Benedictine convent. Zurich became an imperial free city in the 13th century. In 1351, the city joined the Swiss Confederacy.

In the 1520s, Ulrich Zwingli organized the Swiss Reformation at the Grossmünster. After the more than a century of religious wars culminating in the Thirty Years Wars, Zurich proclaimed itself a republic, a sort of religious dictatorship. This ended with the series of revolutions sweeping Europe beginning in France and continuing from 1798 into the 19th century.

One travel commentator stated the following: “At first glance, Zurich seems a little bit small-town and old-world, which lends its abundant charm, but the city itself is not short in sumptuous amenities…Style-seekers in Zurich will find more than just watches, though I will argue that the exquisite engineering of a select Swiss watch, where fine art and machinery meet, is attraction enough.”

After breakfast on 15 August, we get a full-fledged city tour of Zurich. One of the highlights is Old Town (Altstadt) with its collection of medieval houses, churches and Bahnhofstrasse. You should have time to visit shops on that street as well as see the Marc Chagall windows in the Fraumünster, the late 15th century Grossmünster with its twin towers and stained glass windows by Swiss artist Augusto Giacometti,

the Swiss National Museum behind the Main Station, the Kunsthaus Zürich for art, the FIFA World Football Museum, maybe return to Old Town to sample sweets in one of the chocolate ships or candy shops. There are many other museums to peruse or maybe if it is a nice day, you could visit one of the swimming pools. But leave time to pack one last time.

On 16 August, after breakfast, you will be transferred from our hotel to the airport for the trip home.